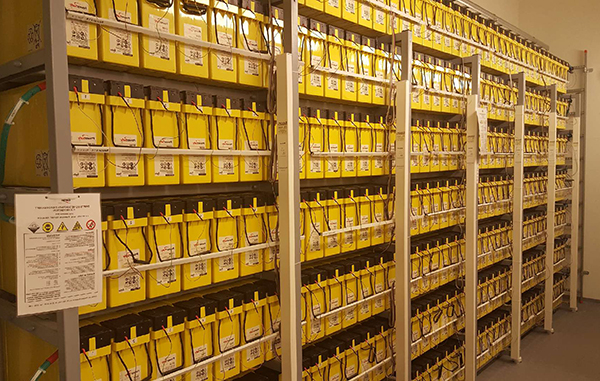 Recombination in a VRLA battery is the process in which hydrogen and oxygen gas, formed when charging, are recombined to liquid water. To maintain a minimal gas production, many VRLA batteries have an overcompensation of lead material on the negative electrode relative to the positive one, and in turn, the excess of lead reacts with the electrogenerated oxygen.

This should eliminate the evolution of hydrogen during normal float charging, only allowing hydrogen evolution to occur during overcharge when the cell is able to recombine all oxygen formed. Simultaneously, as the recombination reactions transpire, an electrochemical process between oxygen and hydronium ions takes place at the negative electrode, resulting in water forming within the pores of the plate*¹.

The electrochemical process involves generation of oxygen at the positive electrode that makes its way through the separator, reacting with lead and thus forming lead oxide. Once the lead oxide has been formed, it reacts with the sulfuric acid, causing some of the lead at the negative electrode to discharge into a state of lead sulfate. However, the float charge current causes the lead to recharge and equilibrium is accomplished. That being said, the potential of the negative electrode is, in practice, often kept under the equilibrium value in order to ensure its full charge. Eventually, the reactions will result in water as well as electric energy being converted into heat*².

According to “The Basic Chemistry of Gas Recombination in Lead-Acid Batteries” by Robert Nelson, hydrogen gas occurs both in valve regulated cells and vatended cells. The explanation given is that parts of the negative electrode exist in a stage of overcharge, which generates hydrogen, whilst others exist in a recombination state, efficiently causing oxygen to recombine. This is due to large gass channels within the glass fiber mat, in which oxygen travels from the positive electrode to the negative one, resulting in the parts without oxygen to be saturated with electrolyte. The electrolyte-filled channels will contribute to overcharge, thus generating hydrogen gas, and the oxygen filled channels will be the site responsible for the recombination process. Although, this demands the negative electrode to only be occupied with one of these processes, alternatively to hold the result of both. Note that the hydrogen evolution will typically not disrupt the oxygen recombination process.