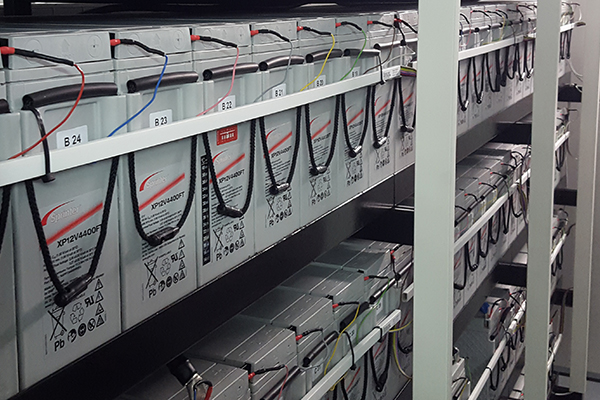 The first method mentioned (constant current charging) has to do with a varied output voltage from the charger, in order to create a somewhat uniform current that is independent of the state of charge (SOC) of the battery. However, constant current charging is not suitable for standby applications such as UPS systems, hence the constant voltage charging is preferable. The method is based on the battery receiving a constant voltage during the charging process regardless of the battery’s SOC.

When the battery has reached the discharged state there is a potential difference between the battery and charger resulting in a high recharge current, limited only by the battery’s internal resistance, which recedes as an increase of battery voltage and SOC occurs. Thus, the lion’s share of its capacity becomes quickly restored. This is commonly referred to as the bulk phase, after which the current decreases to almost zero and the battery approaches fully charged state. The final float charge current keeps the battery fully charged and, in VRLA batteries, drives the recombination process.

The constant voltage charging may include two voltage levels, float charging and equalize charging. Float charge is used for the majority of time in which the batteries are being charged, making it the normal voltage level. To charge a battery that optimizes its effect and life time, the manufacturers determine a specific float voltage level which must be pursued. This is due to several parameters which cause differences within the batteries and therefore affect the voltage level in cells. Parameters such as the electrolyt’s specific gravity (SG), the surrounding as well as the inner temperature of the cell, and the grid alloy. It is the specific gravity of the cell that determines the battery’s open circuit voltage, in shorter terms OCV. In order to avoid inherent losses within the battery, induced by certain resistance within the cell and chemical reactions, and thus keep the cell charging, the charging voltage needs to be greater than the open circuit voltage.*¹

*¹ J. Allen Byrne, Engineering, Training and Tech Support Manager, “THE PROPER CHARGING OF STATIONARY LEAD-ACID BATTERIES. (YOUR BATTERY IS ONLY AS GOOD AS HOW YOU CHARGE IT)”